Summary: The hitchhiking, the epistasis, and the dynamics of adapting populations are energy-dependent and biophysically constrained in the context of RNA-mediated protein folding chemistry. The virus-driven degradation of messenger RNA links mutations to all pathology in all living genera.

An upper limit on the functional fraction of the human genome

For the human population to maintain a constant size from generation to generation, an increase in fertility must compensate for the reduction in the mean fitness of the population caused, among others, by deleterious mutations. The required increase in fertility due to this mutational load depends on the number of sites in the genome that are functional, the mutation rate, and the fraction of deleterious mutations among all mutations in functional regions. These dependencies and the fact that there exists a maximum tolerable replacement level fertility can be used to put an upper limit on the fraction of the human genome that can be functional. Mutational load considerations lead to the conclusion that the functional fraction within the human genome cannot exceed 25%, and is probably considerably lower.

Reported as: Most of Human Genome Nonfunctional: Study

If only a small bit of the genome is functional, then the odds of a mutation taking out an important sequence are smaller, and therefore fertility rates can be lower.

That conclusion makes sense in the context of natural selection for food energy-dependent codon optimality, which biophysically constrains RNA-mediated protein folding chemistry.  Feedback loops link the physiology of pheromone-controlled reproduction to protection from the virus-driven degradation of messenger RNA.
Simply put, the structure of functional DNA is food energy-dependent because what organisms eat prevents virus-driven entropy of their organized genomes in the context of reproduction.

I would like to think that most knowledgeable biologists who properly appreciate evolutionary theory and genomic diversity are well aware of the many problems with ENCODE’s claim.

Anyone who is not aware of the problems should search PubMed for the term “microRNA” before release of the cell biology game “Cytosis” forces them to learn what anyone more than ten years old can learn from playing the game.
Energy-dependent viral latency is biophysically constrained in organized genomes. Nutrient stress and social stress break the constraints and the stress-linked degradation of messenger RNA links viruses to all pathology.
All life on Earth is energy-dependent, which means that the energy must be biophysically “trapped” at least twice.
See also: Gamma-ray telescopes reveal a high-energy trap in our galaxy’s center

…suggests the center of our Milky Way contains a “trap” that concentrates some of the highest-energy cosmic rays, among the fastest particles in the galaxy.

“Our results suggest that most of the cosmic rays populating the innermost region of our galaxy, and especially the most energetic ones, are produced in active regions beyond the galactic center and later slowed there through interactions with gas clouds…”

This appears to be another example of how ultraviolet light constrains the formation of new galaxies. Constraints on energy might be linked to quantum entanglement, which is something that theoretical physicists have not linked from quantum physics to quantum souls.
Should theoretical physicists be asked to include this new information in their theories so that their theories could be used to design experiments that link facts about sunlight as quantized energy to all energy dependent biodiversity on Earth via the physiology of reproduction?
Should theorists be asked about the facts included in these published works?
See also: Codon identity regulates mRNA stability and translation efficiency during the maternal-to-zygotic transition
See also: The Bull Sperm MicroRNAome and the Effect of Fescue Toxicosis on Sperm MicroRNA Expression

Simulations show that there should be more small galaxies in the Universe, but UV radiation essentially stopped them from developing by depriving them of the gas they need to form stars.


The claim of new behavior linked from the light of a billion suns begins to make more sense. Now, a high energy trap links the diffuse glow of gamma rays reaching nearly 50 trillion electron volts can be compared to gamma-ray energies and the energy of visible light, which ranges from about 2 to 3 electron volts.

I am happy that we already presciently linked the differences in constrained energy from “…a change in the electron, which abandoned its usual up-and-down motion in favor of a figure-8 flight pattern.” 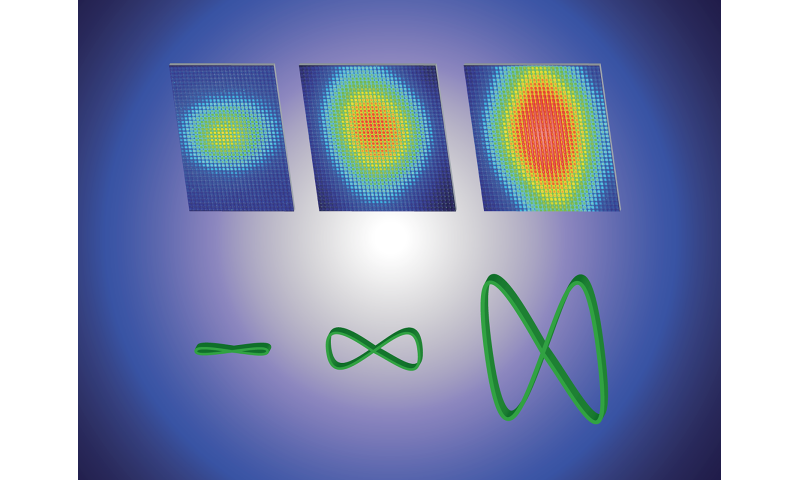 A rendering of how changes in an electron’s motion (bottom view) alter the scattering of light (top view), as measured in a new experiment that scattered more than 500 photons of light from a single electron. Previous experiments had managed to scatter no more than a few photons at a time. Credit: Extreme Light Laboratory|University of Nebraska-Lincoln

In the context of the solar analemma, Mobius strip, and the symbol for infinity, the report on the figure-8 “flight pattern” of electrons is consistent with representations of how the anti-entropic virucidal energy of sunlight is linked under ‘normal’ conditions to the collective energy of all scattered photons. That collective energy links energy as information to all biodiversity via the physiology of pheromone-controlled reproduction in the context of how quantum physics must be linked to quantum souls.

.For comparison see: Hitchhiking and epistasis give rise to cohort dynamics in adapting populations

Beneficial mutations are the driving force of adaptive evolution.

There is no such thing as a beneficial mutation. The virus-driven theft of quantized information is linked to increased virulence of viruses via a single amino acid substitution in the virus. The link from sunlight to food energy is the link to all ecological adaptations.

My comment: Reported on July 18, 2017 as Large-scale study of adaptation in yeast could help explain the evolution of cancer

See for comparison our 1996 Hormones and Behavior review of food energy-dependent RNA-mediated ecological adaptations that link sexual differentiation in yeasts to all biodiversity in all living genera in the context of our section on molecular epigenetics.
From Fertilization to Adult Sexual Behavior

The hitchhiking, the epistasis, and the dynamics of adapting populations are energy-dependent and biophysically constrained in the context of RNA-mediated protein folding chemistry. The virus-driven degradation of messenger RNA links mutations to all pathology in all living genera.

I used the term “adaptive evolution” instead of ecological adaptation to avoid problems with peer-review if the reviewers recognized that my review was a refutation of neo-Darwinian pseudoscientific nonsense.

…the model represented here is consistent with what is known about the epigenetic effects of ecologically important nutrients and pheromones on the adaptively evolved behavior of species from microbes to man. Minimally, this model can be compared to any other factual representations of epigenesis and epistasis for determination of the best scientific ‘fit’.