The Excitable Mitochondria links 4 neurons from a nutrient energy-dependent pheromone-controlled network in a marine invertebrate to human brain development via the conserved molecular mechanisms that link the speed of light on contact with water to the de novo creation of G protein-coupled receptors (GPCRs).  Receptor-mediated species -specific chromatin remodeling links chromosomal rearrangements to all biodiversity via energy-dependent chemotaxis and phototaxis.

My comment: More people need to learn what is known about how the energy-dependent de novo creation of G protein-coupled receptors is linked from RNA-mediated amino acid substitutions to cell type differentiation. Receptor-mediated behaviors link links the epigenetic landscape to the physical landscape of DNA via natural selection for codon optimality in the context of autophagy. Fixation of the amino acid substitutions in supercoiled DNA protects organized genomes from virus-driven entropy and all pathology.

SARCASM ALERT If I told you more about that, the information could get me killed, so… Never mind. Virus-driven pathology will kill you and everyone you love, instead.

— in memory of Robin Williams

Few researchers use sarcasm or humor to make their point, which mean that sometimes they don’t make it.

With no sarcasm or humor they linked everything known about G protein-coupled receptors to all healthy longevity compared to all virus-driven energy theft and all pathology.

For comparison: How is social “evolution” linked to all pathology without acknowledging the role of G protein-coupled receptor signaling in the context of the structure and function of receptors that link chemotaxis and phototaxis in all living genera? Are these researchers joking?

Phototaxis across kingdoms: Microbiology: Here’s looking at you, squid

Link to the innate immune system: A model symbiosis reveals a role for sheathed-flagellum rotation in the release of immunogenic lipopolysaccharide

Link to weekend evolution of the bacterial flagellum: Evolutionary resurrection of flagellar motility via rewiring of the nitrogen regulation system

My comment: Neo-Darwinian nonsense links nothing to anything. Resurrection of something means it existed before the resurrection. Therefore, what ever existed before must be linked from chemotaxis and phototaxis to its origins and to its resurrection. Instead, the researchers claimed that two amino acid substitutions were mutations, and they linked the mutations to the weekend evolution of a new flagellum.

For comparison, here’s a link to everything known about biophysically constrained RNA-mediated protein folding chemistry in all living genera:

Here’s a link to delivery of a “billion dollar baby” RNA-Guided Human Genome Engineering
Finally, here are some links from physics to chemistry and the molecular mechanisms that link nutrient-dependent pheromone-controlled autophagy from RNA-mediated amino acid substitutions to supercoiled DNA, which protects all organized genomes from virus-driven energy theft and genomic entropy.
Press Release: The Nobel Prize in Chemistry 2016

…they predict that the basic components of molecular machines will be used in diverse areas of science: as light-activated switches that can release targeted drugs, for example, or as smart materials that can store energy or expand and contract in response to light.

…the bonds could be readily formed and broken, much like zipping and unzipping the hydrogen bonds that link the two strands of DNA.

A plethora of other switches soon followed. Some were controlled with light or changes in temperature, whereas others worked by binding specific ions or molecules from solution, in a similar way to how ion channels work in cell membranes, opening or closing in response to chemical signals. 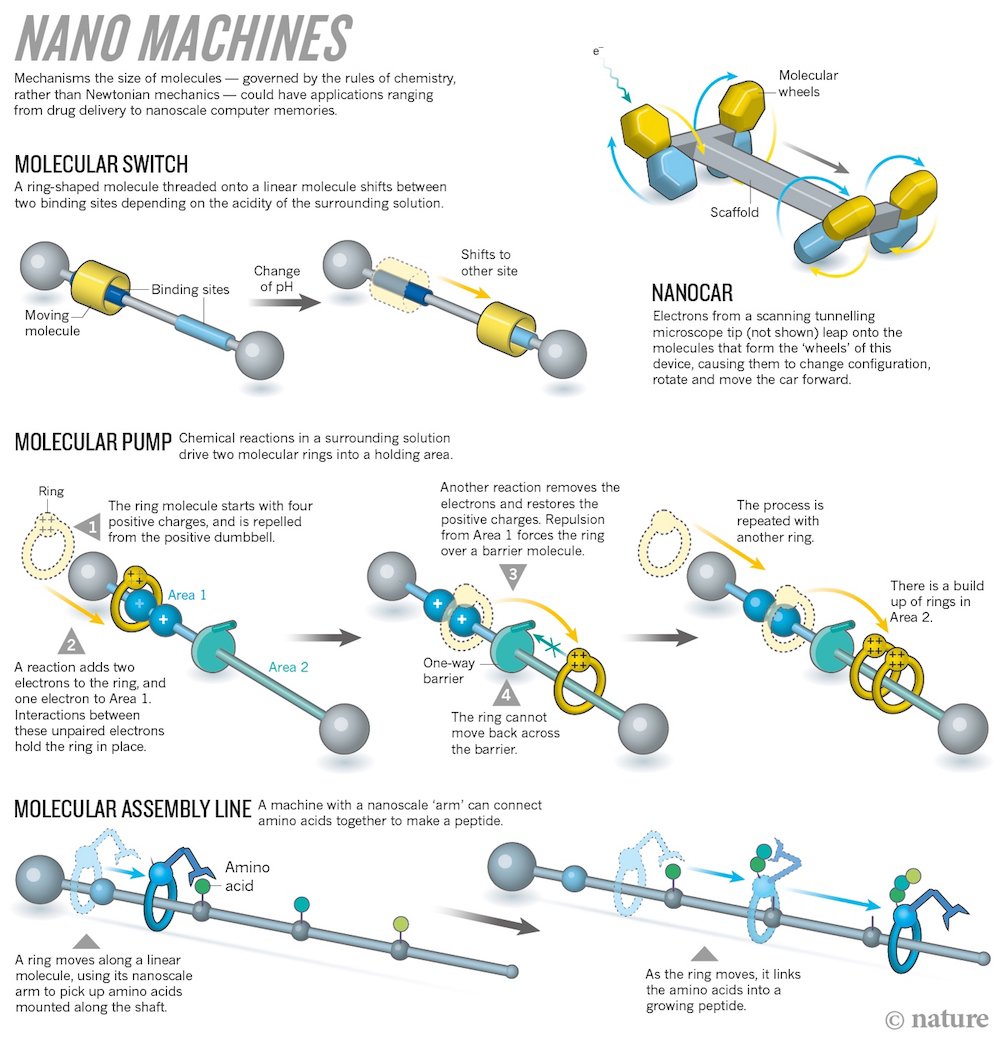