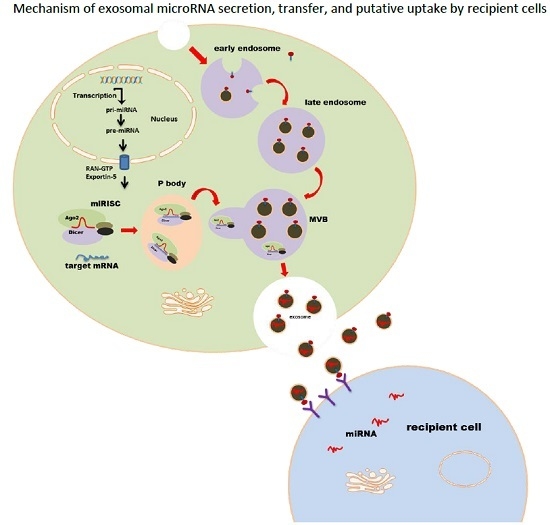 Important aspects will be highlighted as a take-home message (THM) at the end of each paragraph.

THM: Extracellular vesicles transport miRNA in a paracrine and endocrine manner. Questions regarding the cellular options of producing either microvesicles or exosomes and their difference in miRNA composition and number are still unknown.

In my 2014 invited review, the four F’s, Formation–Function–Future and Copulation were included in details about how the nutrient energy-dependent de novo creation of microRNAs must be linked to nutritional epigenetics. My invited review was returned without review by the guest editors of a special issue of “Nutrients.”
I realized the guest editors had “baited me” into providing them with all the available current information and published my submission to Figshare. That’s how I show the level of deception that biologically uninformed theorists still use to obfuscate what is known to serious scientists about biologically-based cause and effect.

Abstract: “This atoms to ecosystems model of ecological adaptations links nutrient-dependent epigenetic effects on base pairs and amino acid substitutions to pheromone-controlled changes in the microRNA / messenger RNA balance and chromosomal rearrangements. The nutrient-dependent pheromone-controlled changes are required for the thermodynamic regulation of intracellular signaling, which enables biophysically constrained nutrient-dependent protein folding; experience-dependent receptor-mediated behaviors, and organism-level thermoregulation in ever-changing ecological niches and social niches. Nutrient-dependent pheromone-controlled ecological, social, neurogenic and socio-cognitive niche construction are manifested in increasing organismal complexity in species from microbes to man. Species diversity is a biologically-based nutrient-dependent morphological fact and species-specific pheromones control the physiology of reproduction. The reciprocal relationships of species-typical nutrient-dependent morphological and behavioral diversity are enabled by pheromone-controlled reproduction. Ecological variations and biophysically constrained natural selection of nutrients cause the behaviors that enable ecological adaptations. Species diversity is ecologically validated proof-of-concept. Ideas from population genetics, which exclude ecological factors, are integrated with an experimental evidence-based approach that establishes what is currently known. This is known: Olfactory/pheromonal input links food odors and social odors from the epigenetic landscape to the physical landscape of DNA in the organized genomes of species from microbes to man during their development.”

Lynnette Ferguson, was one of two guest editors that invited my review.
She is the co-author of The Interaction between Epigenetics, Nutrition and the Development of Cancer This article belongs to the Special Issue NutritionalEpigenetics

Protein folding chemistry links energy-dependent changes from angstroms to ecosystems in all living genera via the innate immune system and fixation of RNA-mediated amino acid substitutions in supercoiled DNA. Supercoiled DNA exemplifies natural section for energy-dependent codon optimality, but theorists will not accept that fact. They would rather believe that the mutations in DNA are naturally selected and that mutation-driven evolution automagically occurs outside the context of energy or the virus-driven energy theft that causes all mutations and all pathology.

See also: The developmental basis for the recurrent evolution of deuterostomy and protostomy

This scenario challenges the assumed value of extant blastoporal behaviours for explaining the evolutionary origin and diversification of Bilateria that has been presumed for over 100 years4,5,6,7,9,10,11. Freeing the constraint that the mouth and anus have a necessary association with the embryonic blastopore will help in understanding the developmental events underlying the evolution of an alimentary canal5,20,21,50, and ultimately the appearance and diversification of bilaterian body plans.

All scenarios that failed to link energy-dependent behavior to the physiology of reproduction and also failed to link virus-driven energy theft to all pathology have always been based on questionable assumptions. The assumptions fall outside the context of Darwin’s “conditions of life,” which require links from what organisms eat to signaling and sensing and the behavior of other organisms.

For example, Schrodinger (1944) linked excretion from mammals to sunlight as the source of anti-entropic virucidal energy used to support all ecosystems. All serious scientists have done that since Thomas Hunt Morgan won the 1933 Nobel Prize in Physiology or Medicine for linking chromosomes to transgenerational epigenetic inheritance long before most people understood what the term autophagy means.